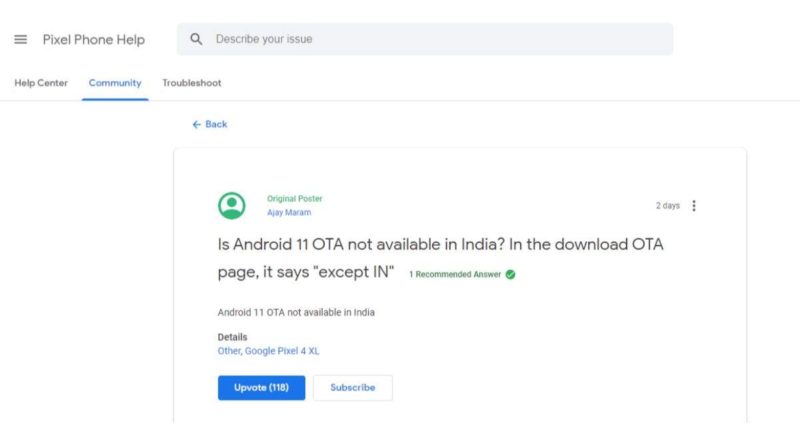 As per the report, “Google’s OTA images page has download links for the Android 11 stable builds for all Pixels, and the version notes suggest the build is available for all carriers except IN (India).” Incidentally, the Android 11 build for the company’s latest smartphone Pixel 4a is not available for EMEA, Singapore and India as the phone is still to launch in these markets. However, the OTA images for all other Pixels state that the update is not available in India.

The miss seems to have not gone well with several Pixel smartphone users in India. Some of them complained on Google support forum of not recieving the update at the same time as the users in rest of the world. “No update for me either on my 3a XL..are we being deorioritized or what? It’s not that all the Asian countries are left out since people over Sri Lanka got that on day one…it’s quite disheartening because day one update is one of the few unique selling points of pixel series and Google can’t back down their own promise,” said a user named Abishek Roy.

“Yes, similar situation with my device as well (P2XL), haven’t received an update. I believe Google is rolling it out in successions based on Geography or based on recency of pixel device. It’s just a guess, pretty sure Google can manage worldwide roll out because frankly it’s Google. Anyways waiting for getting my hands on the last OS update for my device :(,” wrote another user named Tejas Sreenivasan.

The eligible phones for the upgrade include Google Pixel 2, Pixel 2 XL, Pixel 3, Pixel 3XL, Pixel 3a and Pixel 3a XL.

Twitter for 2-step verification with a physical security key

According to 9to5Mac , last year, Twitter added the option for users to sign in with a physical security key

OnePlus WallPaper app changes wallpaper based on your phone usage

Microsoft has announced the end of official support for its Internet browser, Internet Explorer.

The Google app on iOS is increasingly like a web browser

It is reported that LG will announce the closing of the smartphone business on April 5.

OnePlus 9 will come with ColorOS.

Why should you stop using services that force you to use SMS-based two-factor authentication?

Adobe Flash Player ushered in the end: the last update, disappear after December 31

Android 7.1 and older systems will be stopped with certificate signing from January next year: N many web pages will not be accessible