According to PhoneArena news, Samsung’s new generation A series of mid-range smartphones recently appeared, that is the Galaxy A40. The Galaxy A series, which was previously exposed, is the A50, which is said to carry a large capacity battery of 4000 mAh.

Information of the Samsung A40 mobile phone was recently exposed on Geekbench. Exposure information shows that the mobile is equipped with Samsung Exynos 7885 chipset, equipped with 4GB of memory, pre-installed Android 9 Pie system. The phone has a single-core score of 1319 and a multi-core score of 3976. 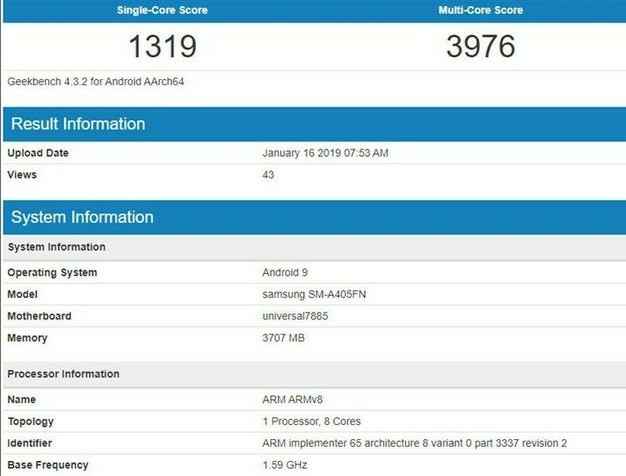 According to reports, Samsung plans to launch Galaxy A40 mobile phones in many European markets, such as the United Kingdom, France, Germany, Poland, the Netherlands and some Nordic countries.

Previously, Samsung’s official website announced another series of Samsung, the launch time of the “Galaxy M” series – will be officially unveiled on January 28. It is understood that this series will introduce new products for the entry-level market.