Codenamed “POSEIDON” OPPO Snapdragon 855 flagship appeared on GeekBench with a single-core score of 3810 and multi-core score of 10963, running Android 9. 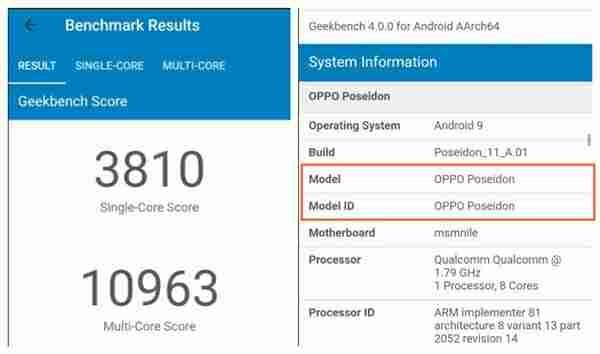 The Snapdragon 855 is the flagship platform launched by Qualcomm at the end of December 2018. It is the world’s first commercial mobile platform that fully supports multi-gigabit 5G, artificial intelligence (AI) and immersive extended reality (XR).

Based on the 7nm process technology, the Snapdragon 855 uses a three-cluster eight-core architecture with a CPU clocked at up to 2.84GHz and a GPU with an Adreno 640. The graphics performance is 20% better than the Adreno 630.

Unfortunately, more details about the upcoming except the Snapdragon 855 are currently unknown. It is reported that the aircraft belongs to the Find series. From the perspective of OPPO product layout, the R series is equipped with a mid-end platform, while the Find series is the flagship platform, so OPPO POSEIDON does not rule out the possibility of the Find series.