Microsoft official blog announcement  US Microsoft officially released “TypeScript 4.0” on August 20 (local time). Currently available from package management systems such as “NuGet” and “npm”. Extensions and plugins for “Visual Studio” and code editors have also been released.  ”TypeScript” is an open source programming language developed by Microsoft. It is a superset of statically typed functions added to “JavaScript” and is suitable for applications such as large-scale development where “JavaScript” has been weak. The deliverables have a mechanism to be transpiled (converted) to “JavaScript” and executed, and it is also attractive that it can be widely used in environments that support “JavaScript” such as Web browsers and “Node.js”. The QA site familiar to developers, “StackOverflow” is the second most beloved language (1st is “Rust”), and about 89% of developers want to use it again in the “The State of JavaScript” survey. I am very satisfied with the answer. 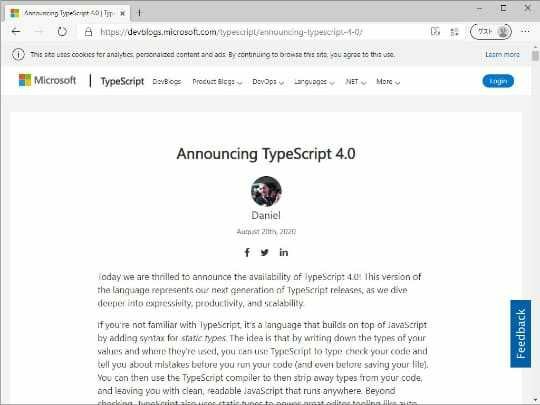 In addition, “TypeScript 4.0” includes “Variadic Tuple Types”, “Labeled Tuple Elements”, “unknown” in “catch” clause, three new assignment operators (a && b, a || b, a ?? b). Is supported, and the support function of the code editor is enhanced. The supported editors are “Visual Studio 2017”, “Visual Studio 2019” and “Visual Studio Code Insider”.